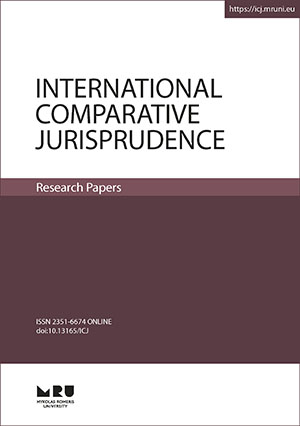 Summary/Abstract: The latest “(Anti)Separation Bill” in France stirred new waves of discussion and criticism. Given the fact that France and the Czech Republic are European secular states and members of the EU – with the former acting as a trendsetter and the latter being the second most agnostic state in the EU – this paper attempts to understand the path down which Europe is heading on the question of freedom of conscience, religion, and expression. The author examines the approach of the Czech Republic to the issue of wearing Islamic religious symbols through the prism of the Czech Supreme Court and EU experience in the European court of human rights in the fields of education and employment. The problems associated with the wearing of religious symbols, especially Islamic ones, as scarves for women that cover their heads (i.e., the hijab) have been relevant for the past few decades, and remain open questions even in democracies such as the EU member states. This paper will discuss the position of one secular state – the Czech Republic – through the case law in this area, as well as providing an overview through the decisions of the European Court of Human Rights in the cases of the EU member states. The aim of this article is not to compare political trends and judicial approaches between France and the Czech Republic, but rather to provide alternative approaches to the right to manifest religion as demonstrated by latest judgement of the Czech Supreme Court – a source of inspiration in the vein of the motto “Liberty, equality, fraternity”.