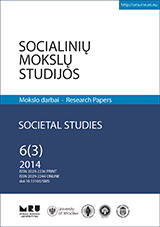 Summary/Abstract: The aim of the article is to research, reconstruct, present and discuss the provisions of faction of social-democrats of the Constituent Seimas and LSDP in general in the process of reception of the temporary Constitution (June 2, 1920) and the permanent Constitution (August 1, 1922) of the Republic of Lithuania. Summarizing, it can be stated that social-democrats of that period aimed to consolidate radical parliamentary democratic form of governance, which had to consolidate not only radical political democracy, but social and economic democracy, as well. Social-democrats of that period were implacably hostile to the institution of the president, which they considered not democratic. It should be stated that constitutional provisions of social-democrats were caused by the spirit of the times originated from the collapse of undemocratic monarchies during the revolutions in 1917 and 1918, popularity of democracy in its radically parliamentary, ‘French’ version, adherence to one of the most radical socialistic interpretations of Marxist doctrine and ideological tradition of socialism in general. Also, they were exposed by circumstances and characteristics of LSDP activities at that time. All of that resulted into hypertrophied and not adequate assessment of presidential institutions according to the permanent Lithuanian Constitution of the Republic of Lithuania (1922) and assessment of this Constitution in general.