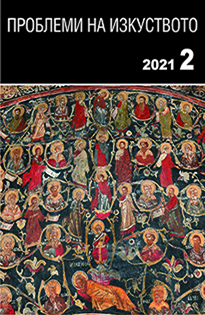 Summary/Abstract: This article presents the history, architecture and murals at the Church of the Dormition in the village of Dolna Dikanya, focusing on the 16th-century paintings extant on the east wall of the naos: the Ascension, the Annunciation, Virgin Platytera, Adoration of the Lamb and Sts Deacons Stephen and Romanos the Melodist. Placing the Archangels Michael and Gabriel in medallions flanking the Holy Mandylion in the composition of the Annunciation may be interpreted as an iconographic specific. The sole example we are aware of is at the Church of St Demetrius (1488) in the Monastery of Boboshevo. Another specific, unknown from other monuments, is the representation of Christ Emmanuel in a medallion in front of the chest of the Virgin in the conch, replicating the radiancy in the scene of the Ascension. The frescoes were, in all likelihood, painted by a team of two masters of local significance. Until now, the literature has dated the murals at the Church of the Dormition to the 16th or 17th century. At this stage, no stylistic parallels could be drawn; still, some of the characteristics are similar to the monuments of the second half of the 16th century.