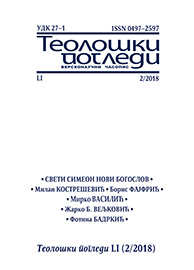 (review of the article by Marić et al., "Pappas Tjehodrag and his inscription", Historical contributions 33, 2007, 9–32)

Summary/Abstract: In the year 2003., during archeological excavations in Lištani near Livno, Herzeg- Bosnia, in entity of Federation of Bosnia and Herzegovina in Bosnia and Herzegovina it was found the grave of a man-husband and his wife, bearing the Cyrillic inscription † Се лежитъ п(о)пъ Тѣходрагъ. А ıε имѣлъ θ съınoвъ, тере срѣдъ ıεдиnѣмъ годѣ стръ ıε, which by the shape of letters in it can be dated roughly in XIV c. Croatian scientists, headed by the chief archeologist of the excavations, during which the inscription was found, are confident that in that Cyrillic grave inscription some alleged elements of the script has been taken over from (supposedly Catholic and automaticaly Croatian) Latin script and (supposedly absolutely just Croatian) Glagolitic script and shaped the conclusion thus that one who’s laying in the grave under that inscription was – according to the alleged elements of the script taken over from the Latin script – a Catholic and automaticaly Croat, and – according to alleged elements of the script taken over from the Glagolitic script – absolutely just Croat and, predictably, Catholic Glagolitic priest. They also imagined that the inscription mentioned had been written in some so called “Croatian Cyrillic script”, which supposedly was used by Catholic Glagolitic priests- Croats in Livno (and broader, in Bosnia and Herzegovina), as well in Dalmatia, in the plane of everyday life, while in mass and on prayers Glagolitic script was used, adding that Тѣhodragъ, as “Catholic Glagolitic priest” shouldn’t have had a wife and children аccording to the cannon law, but he nevertheless had them. Finaly, they imagined that the inscription mentioned had been written in, predictably, Croatian redaction of Old church Slavonic/ Croatian Slavonic (litterary) language. On the mish-mash given, evidently just in function of ethnical and linguistic engineering it’s been answered by scientific counterarguments that: 1) elements of the script taken over from Latin and Glagolitic scripts were miscalculated observations, 2) until „All-Croatian Catholic congress” („Svehrvatski katolički kongres”) in the year 1900. there hadn’t been no absolute equality (of ideas) Catholic = Croatian, ie. Catholic = Croat, 3) round Glagolitic script was the oldest, All-Slavic script (older than Cyrillic script), being in use all around the Slavic world, mostly in (Vardarian) Macedonia/„ south Old Serbia” (thus, it should be called Serbian), 4) angleshaped Glagolitic script had been used by Tschakavian speaking („genuine”) Croats (and Catholics) as Croatian national script (thus it’s called Croatian), but also out of Croatia, in Bosnia and Herzegovina, by Serbs of Catholic, Orthodox and heretical krstjani’s faith, 5) some so called “Croatian Cyrillic script” of their’s had been called (1582., 1611.) in Bosnia and Herzegovina, as well in Dalmatia, Serbian script or Serbian/ Illyricscript, and in nearby Dubrovnik it had been also called (1511–1618.) Serbian script or Serbian, ie. Illyric script, 6) the Тѣhodrag’s so called non-cannonical wife had been buried afterwards in the same grave with him in a cannonical rite, 7) during XIV c. (1378–1400.) all Bosnian kings and queens had been titulating themselves as kings/queens of Serbs in Bosnia, Pomorje, Zapadni krajevi/ Završje etc. (and Livno with its surrounding having been in Završje!), but only in XV c. they would be adding (previously conquered) Dalmatia on the list, thus with every mention they were the kings of Dalmatia adding the notion ie. Croats (because, in these times, Croats were en mass – just there in all the state of Bosnia), and instead of king of Dalmatia it had been found, once, king of Croats in Dalmatia and king of (territory of) Croats, 8) the charter of Bosnian ban Stipan/ Stepan/ Stefan Kotromanić from the year 1333., and edited in Srebrenik, clearly indicated that the ikavian sounding Old Serbian (speaking) language was the main language of communication of all the people in the state under the rule of the ban, Bosnia (to which Zapadni krajevi/ Završje were annexed in the years 1324–1326., and Livno with its surrounding having been in Završje!) in the manner that near its end it was written that the charter had been given in 4 copies, from which 2 copies срьпсциε „in Serbian language”, adding that it was done so том... сваки да... види истиn „with the aim... that everyone... could see the credibility of the ban’s words”. From all the things explained it has been given the conclusion that the above mentioned pappas Tihodrag had been Serb, Orthodox and Orthodox priest (almost surely under the Mileševa archiepiscopate), who spoke ikavian- sounding Old Serbian, and his grave inscription was one of the older Serbian Cyrillic inscriptions in Old Serbian (speaking) language.