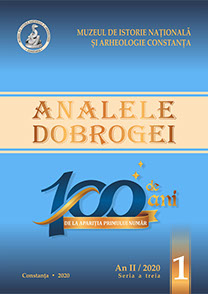 Summary/Abstract: For economic and business historians, the Russian–Turkish Peace of Adrianople (1829) marks the true beginning of market competition on the Danubian hinterland. After gaining political independence in 1878, Romania aimed to strengthen its economic presence on the international markets. The new commercial orientation of the country towards Austria-Hungary, through the provisions of the Customs Convention of 1875, had visible results on the overall trade of Romania during the times of the commercial war (1886–1892) against the Dual Monarchy. Profound changes in the structure of the Danubian ports of Brăila and Galați were introduced in 1883. The free-port regime was abolished, and the liberal government in Bucharest started the development of the Romanian maritime ports. Using the above-mentioned hypothesis, this paper analyses the main aspects related to the rivalry between the Great Powers and France company in the battle of integration in the international grain deposit-ports. This rivalry contributed to the establishment of the Fraissinet & Co.’ s navigation house which competed with other foreign companies. In addition to the economic benefits achieved with its shipping activities, the France company had access to detailed information on various aspects of the Romanian ports. At the end of the first part of the 20th century, the Romanian cereals trade that ruled for a century, lost its ground with respect to oil trade. The relevant references used in this paper (bibliographies and statistical publications) are from The National Archives of Romania, Galați Branch, The European Commission of the Danube Fund and Diplomatic Archives of the Ministry of Foreign Affairs.