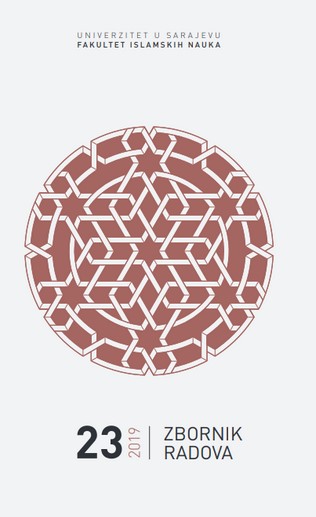 Summary/Abstract: The arabesque is a visual abstract form of Islamic culture which, together with calligraphy, most vividly affirms the central idea of Islam – Tawhid, expressing thus the desire of a Muslim for the Infinite. It has, through its surface or plastic geometric, plant-like and calligraphic ornamentation, become one of the most characteristic features of Islamic art. The first part of the paper discusses arabesque as a form of Islamic art which, with its stylized and abstract forms, continuity of rhythm and aspirations to return to the primordial order of things, becomes a visual confirmation of Tawhid, a sign of God’s oneness, transcendence and un-representability. Questions about the origin of arabesque, its name and concept, types and forms of its aesthetic and artistic realization are also considered. Further, the paper discusses the relationship between arabesque and calligraphy, through which the pinnacle of decorative perfection in Islamic art was reached. In the last part of the paper, a discourse on the influence of arabesque on the shaping of consciousness about the timeless, infinite and supra-formed, as opposed to temporal, finite and formed, is developed.