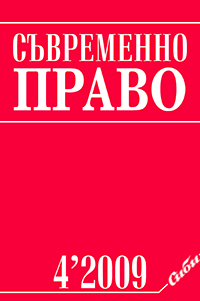 Summary/Abstract: According to Art. 293 of the Commerce Act, a written or other form is required for the validity of a commercial transaction only if such form is prescribed by law. A party to a contract, however, may not refer to the nullity of a transaction, if from the party’s behaviour it can be concluded that he/she has not contested the validity of the statement. The analysis of some decisions of the Bulgarian Supreme Court of Cassation demonstrates that the above-mentioned provision of the Commerce Act is lex imperfecta and leads to insecurity of the commercial turnover. If a notarial deed or a notary certification of the parties’ signatures is required for the validity of a commercial transaction, this transaction shall be considered valid also in cases in which the form is not respected, but the party has not contested its nullity.The position expressed in the article is that Art. 293 shall be interpreted correctively, so that commercial transactions requiring the form of a notarial deed or notary certified signatures should be excluded from the group of transactions to which Art. 293 is applicable.