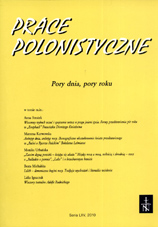 Summary/Abstract: The purpose of the article is an attempt to show many aspects of Lilith theme, both in literature and in culture: as a demonic goddess of the night, sensual, dangerous seductress of young men, as well as the first feminist who chose freedom at the cost of being expelled from the Paradise. Subject to detailed considerations are the relationship between the figure of this Hebrew goddess of darkness and storm, and the sensation of fear at night. The paper includes etymology of the name Lilith, mythical sources, iconographic presentation of characters, literary interpretation of the variants of this motif, and a reflections on the folklore and psychological origins of fear at night on the example of Lilith and demons associated with her (Lamia, Empusa, Hecate, incubs, succubs).