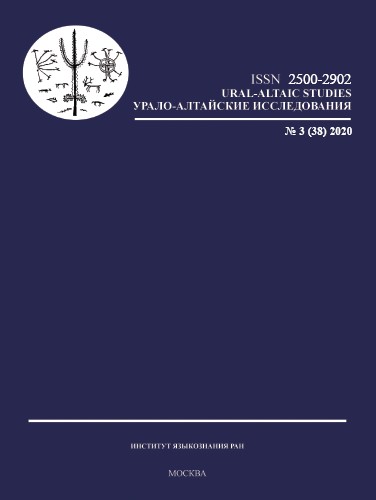 Summary/Abstract: In this paper I show how the inflectional system of the recipient language can influence the strategy of morphological integration of loanwords, and how loanwords themselves can affect the inflectional system. I discuss the morphological integration of Russian nouns in two Southern Tungusic languages: Nanai and Ulch. These languages are very close to each other and have very similar inflectional systems. At the same time, they treat Russian nouns in rather different ways. In Ulch, Russian nouns appear to form a separate inflectional sub-class. Both in Nanai and in Ulch, there are two inflectional classes. Stems ending in vowels take one set of inflectional affixes, while stems ending in consonants take another set of inflectional affixes. The range of stem-final consonants is very restricted. The main problem in loanword accommodation is that many Russian nouns have final consonants non-typical of the Nanai and Ulch inflectional systems. This problem is solved in Nanai and Ulch in different ways. Neither in Nanai, nor in Ulch such Russian consonant-final stems are included in the class of native consonant-final stems. In Nanai, they take an epenthetic vowel and behave as standard vowel-final stems (klass-a-wa ‘class-STEM-ACC.V’). In Ulch, they also take inflectional affixes typical of vowel-final stems, but still end in consonants (klass-wa ‘class-ACC.V’). Therefore, such nouns can be analyzed as forming a separate minor exceptional stem class. A closer look at morphological variation and some surface-level phonetic features attested in the Ulch inflectional system allows us to explain the unexpected strategy of loanword accommodation in Ulch and its differences with that of Nanai. Actually the behavior of Russian loanwords goes in line with the native inflectional system. The crucial factor is that in Ulch the distribution of native nouns by inflection classes is less strict and more complicated than in Nanai. Russian loanwords, which are inflected in Ulch in a non-standard way, in their turn, might influence the native Ulch system of nominal inflection, increasing its instability.