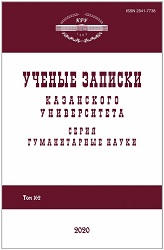 Писцовые материалы Казанского уезда середины XVII века: видовая принадлежность и атрибуция
The Problem of Certification of Scribal Materials of the Kazan District in the Middle of the 17th Century: Specifics and Attribution

Summary/Abstract: The paper presents the results of a source study of two manuscripts produced in the course of the scribe description of the Kazan district, which was performed in the middle of the 17th century. The full texts of both filings were deposited in the fund of the Local Order of the Russian State Archive of Ancient Acts (f. 1209, RGADA) as part of the first two volumes of the storage unit, identif. no. 128. Comparison of the contents of the monuments, features of the presentation of information, as well as involvement in the analysis of other acts and documents of scribal paperwork made it possible to clarify the specifics and attribution of the manuscripts. The study allowed us to conclude that along with the rewriting of the draft version of the field books of “letters and measures”, a number of other books with different purposes were produced. The latter include both scribe books involved in the analysis. The manuscript of the first monument published in 2001 is not a book of “letters and measures”, but is rather a list or listed possessions, which were compiled no earlier than 1656. The second monument, which was published in 2018 and certified as a list book, is a separate description of the lands of non-Russian servants, made no earlier than 1653/54 and no later than 1655/1656. The place of their creation was the Order of the Kazan Palace associated with the official career of the clerk Fedor Ivanov, who counted the pages of the manuscript.