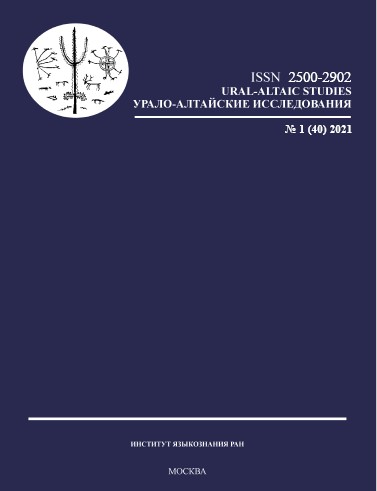 Summary/Abstract: The article deals with the Nenets borrowings in the Ob-Ugric languages: Khanty and Mansi. The main list of these borrowings was compiled by Wolfgang Steinitz in a work published more than half a century ago. In the paper I focus on phonetic features of the borrowed words. These borrowings represent predominantly the cultural vocabulary and are geographically quite limited being presented only in the northern dialects of Mansi and Khanty. Despite of this many of these words retain very archaic features of Nenets phonetics. This allows us to consider linguistic contacts between the Ob-Ugrians and the Nenets as rather old. Consideration of the corpus of the borrowings also allows to shed some light on the relative chronology of historical sound changes in the Nenets language. In the paper all Nenets loans in Mansi and Khanty are compared with their possible sources in Tundra Nenets and in Forest Nenets. This comparison shows that in Forest Nenets a potential corresponding word is often missing or looks phonetically too different and therefore can not be regarded as the source of borrowing. Thus, the donor language was definitely the Tundra Nenets, and not the Forest Nenets language. Mansi and Khanty words borrowed from Tundra Nenets may reflect the following archaic features of Nenets historical phonetics: final vowels (before reduction into °); final consonants, changed into the glottal stop in modern Nenets; intervocalic -m-, changed into - w- in modern Nenets; final glide -w, disappeared in modern Nenets. All words borrowed in Ob-Ugric languages from Nenets can be divided in two groups with respect to these parameters: some of them definitely preserve a more archaic state of Nenets phonetics, whereas others are phonetically much closer to modern Nenets words. Another feature that allows to evaluate the relative age of borrowings is the labialization of vowels in Kazym Khanty and in Mansi: in earlier borrowings Nenets vowel a has changed in Kazym Khanty and Mansi into a labial vowel, whereas in later ones it has preserved its original quality.