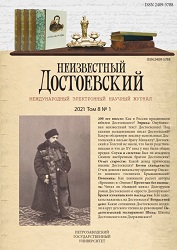 Summary/Abstract: The article deals with the history of the sale of the real estate property belonging to A. F. Kumanina, the Moscow aunt of F. M. Dostoevsky, in the Tula province. The division of the property received by her heirs after her death was to be carried out after their entry into the ownership of the estates: first Tula, then Smolensk and Ryazan, which were pledged. Lawyers played a criminal role in this process. They developed an illegal scheme during the division and sale of the house and land plot in Tula, which predetermined the fate of the Kumanin inheritance, most of which was spent on paying debts, arrears and attorney fees. In connection with the inheritance case, F. M. Dostoevsky sought legal assistance from V. P. Gaevsky, V. I. Veselovsky, B. B. Polyakov, V. I. Gubin, E. V. Korsh, A. V. Lokhvitsky, V. I. Lustikh. The facts testifying to the unseemly role of the attorneys, which ultimately led to the unexpected outcome of the “Kumanin story,” are presented in the memoirs and correspondence of the writer’s brother Andrey Mikhailovich. They are also indicated in the correspondence of the other heirs of A. F. Kumanina, including F. M. Dostoevsky and his closest relatives, who tried to regain the right to own hereditary estates, as well as the materials of the genealogic inventory of N. S. Lazarev-Stanishchev, who became one of the participants in the “Kumanin inheritance” scam. The Appendix contains a previously unpublished letter from D. A. Smirnov, assistant to attorney V. I. Veselovsky in the “case of the Kumanin inheritance,” to A. M. Dostoevsky dated February 10, 1874 about the sale of the Kumanin house in Tula.