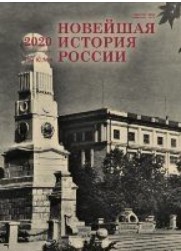 Summary/Abstract: The article shows that the general dynamics of consumption was oscillatory in nature and there were significant provincial differences. Two methods are used to identify these differences. The first method is based on a direct calculation of the grain remaining in the provinces by taking into account the crop, import and export. The second method is based on anthropometry data, on data on the growth of recruits in various provinces. This second method allows you to determine the dynamics of the standard of living in various provinces in the half-century before the revolution as well. Both methods indicate the existence of a large area of low consumption in the Central Black Earth region, and the standard of living in this area has a downward trend. These results are consistent with the findings of the 1901 Commission, which characterized the region as an “area of impoverishment”. Correlation analysis shows that “impoverishment” was due to the fact that in the first half of the 19th century this region had the largest percentage of serfs; it was an area of distribution of corvée latifundia. During the liberation, serfs received small allotments, which decreased with population growth. At the same time, the remaining large landowners exported their bread to other regions and outside the country. The combination of peasant low land and export-oriented large farms led to agrarian conflicts. Here was the epicenter of peasant uprisings in 1905 and 1917, and these provinces became Bolshevik “fortresses” during the Civil War.