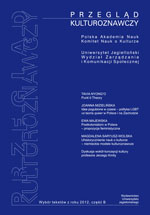 Summary/Abstract: he text explores ways in which “Western” ideas of LGBT and queer politics travel and are nested in Poland. I am here particularly interested in the functioning of the notion of time. I claim that Polish LGBT activism cannot be simply categorised as “identitarian” or “queer,” because it exists in much different geo-temporality than that of “the West.” I focus on Campaign Against Homophobia, the largest and best-know Polish LGBT organisation. Their choice of strategies and discourses can be considered a certain queer mixture of ideas as represented through various historical stages of Western LGBT activism. I will explore reasons for this. Upon the emergence of LGBT activism in Poland in the 1990s, “Western” ideas were unanimously applied without much attempt at understanding their cultural and historical context. At one point in the Polish history, “Western time” simply took over, becoming a “universal time” for both the West and CEE. However, what is continuity from the Western perspective, here is a knotted and de-historicised cultural phenomenon – as much imposed as welcome – of which Polish LGBT activists and academics are trying to make sense. Thus, rather than repeating dominant discourses of CEE trying to “catch up with” Europe, I intend to look into much finer processes of eaving and sawing geo-temporal realities into Polish LGBT activism.