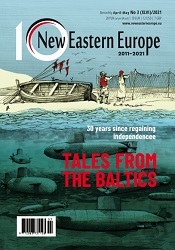 Summary/Abstract: On January 17th this year, the return of Alexei Navalny to Russia was being watched by the entire politically-minded society, or at least a large part of it. People across the political spectrum were equally fixated. I know many leftists (or liberals) who were sincerely worried, and many rightists (or conservatives) who rubbed their hands maliciously. All were watching via the internet livestream or traditional media, and some with one eye closed. The arrest of Navalny at Sheremetyevo airport became the starting point not only for street protests and clashes, but for intra-family disputes.