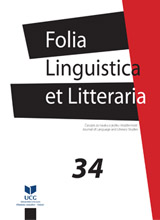 Summary/Abstract: Being some major problems of our contemporary world, racism and ethnocentrism demand persistent critical scrutiny. One oft-neglected aspect of these problems is how such prejudices are shared and communicated among the members of the dominant group. This study examines Lynn Nottage’s Pulitzer Prize-winning play, Sweat (2015), as a dramatic representation of how racism and ethnocentrism are reproduced and communicated as a social cognition. To this aim, the study tries to employ Teun Adrianus Van Dijk’s cognitively-based discourse analysis and focus on some micro-level aspects of racism as a social cognition rather as an abstract historical phenomenon. Contextualizing the play within its socio-historical moment, three trends of schematic attitudes and mental models regarding ethnocentrism, as Van Dijk’s theory outlines are identified from and studied in the play. The findings demonstrate the socio-cognitive dimension of the discourse of racism, particularly the way it is reproduced and communicated among the dominant in-group members. Moreover, the discussion offers some insight on Lynn Nottage’s latest dramatic endeavor in a hard-hitting portrayal of the intersections of race, class, and political economy and in drawing attention to the real meaning of diversity and inclusion in contemporary America.