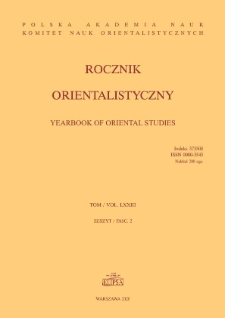 Summary/Abstract: In recent reflections on the current situation of ethnic and religious minorities in Iraq and the threat of their extinction, a number of Iraqi intellectuals have stressed they cannot imagine their society without the plurality and diversity that have contributed to the creation of a common interethnic and interreligious Iraqi identity and historical memory. Among them are writers who raise this issue not only in essays, articles and interviews, but also in their fiction. The aim of the present article is to show the interweaving of literary discourse on Iraqi minorities and the wider debate among Iraqi intellectuals on the deteriorating condition of Iraqi Christians – which has led to their mass emigration – as reflected in a number of post-2003 Iraqi novels. The literary image of this exodus cannot be discussed without addressing the position of Christians among other Iraqi communities currently and in the past, as well as the question of their identity. This article refers to the following novels: Ṭaššārī (Dispersion, 2012) by In‘ām Kaǧaǧī, I‘ǧām (Diacritics, 2004) and Yā Maryam (Ave Maria, 2012) by Sinān Anṭūn, ‘Irāqī fī Bārīs. Sīra ḏātiyya riwā’iyya (An Iraqi in Paris: An Autobiographical Novel, 2012) by Ṣamū’īl Šam‘ūn, Frānkanštāyn fī Baġdād (Frankenstein in Baghdad, 2013) by Aḥmad Sa‘dāwī, and Sabāyā dawlat al-ḫurāfa (Slaves of the Imaginary State, 2017) by ‘Abd ar-Riḍā Ṣāliḥ Muḥammad. The article is divided into four parts, including an introduction in which the above-mentioned debate is presented. The second part depicts the plight of Iraqi Christians after 2003 through a brief outline of the lives of four literary characters. The third part focuses on the situation of Iraqi Christians before 2003 by relating the memories of five fictional protagonists. These two descriptive parts are followed by some final remarks. The theoretical framework of this article is based on the reflections of Birgit Neumann and Astrid Erll concerning the role of literature as a medium in the construction of cultural memory.