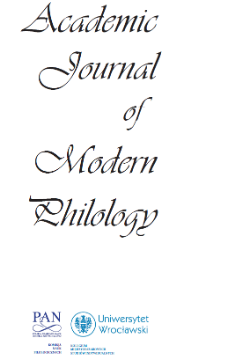 Summary/Abstract: It is not an exaggeration to say that mass media have seized the modern world. One can hardly imagine life without the Internet and a smartphone. The TV series Black Mirror, created by the British satirist Charlie Brooker, depicts the “side effects” that the technology may have on one’s life as well as the repercussions it may bring if used without caution. Charlie Brooker conjures up the future world in which media and technology destroy interpersonal relationships leading to moral atrophy. Nevertheless, the TV series is not a criticism of both the media and technology as such. What Black Mirror warns against is the abuse of technological inventions and the addiction to the mass media. Examining Brooker’s TV show, the article focuses on social phenomena that may be observed in the modern world. Notions such as the culture of denudating, social exhibitionism and the public amusement are concepts that represent issues which need great attention in the times of change. Looking through “black mirrors” of smartphones, one does not perceive other individual as a human being, but rather as a virtual simulacrum. What nowadays makes people even more virtual are social accounts which give any stranger an easy access to one’s life. The users covet for approval which is reflected in the number of likes. Human being is defined based on an artificial profile, which provides its viewers with fake information. All things considered, Charlie Brooker wants the audience to realize that if one forgets about the value of other human being and starts to abuse media and technology, the “side effects” will impact the forthcoming future.