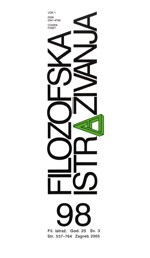 Summary/Abstract: The works of Frane Petrić have been studied intensively in Croatia and abroad in the last decades. Petrić does not stop to amaze us with his great erudition. Ali the themes he wrote about - beginning with his juvenile works and taking its mature shape in Nova de Universis Philosophia - were studied systematically and in opposition to authorities and contemporanities. This also applies to his Poetics. That huge work is not fully presented in this article, but, instead, it’s one aspect have been investigated. This work is considered to be a specific defense of poetry, which has been taken by Petrić’s unbreakable connection and joining together poetic and divine, which has the miracle as their common. In reading this work, we could not help but to be amazed over the quantity of issues it elaborates. Even more amazing is the clarity of Petrić’s language in most complicated themes, as vvell as the impression that in front of us we have a book which can say a lot to contemporary scholars of poetics and aesthetics.