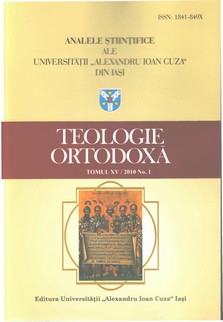 Summary/Abstract: The confession of Christian Creed turn around the belief that Jesus Christ suffered, was crucified was buried and on the third day he resurrected from death. Rotted in biblical and traditional confession about Jesus the Savior, the Nicean-Constantinopolitanus Creed in fourth and fifth articles proclaims the orthodoxy expressed by each believer. Analyzing the fourth article it’s underlined the historical survey and universal consensus, beginning with biblical confession about Jesus crucify under the rule of Pontius Pilate, by quoting Apostolic and Apologetic writers from indivisible Church. The uniformity of confession was a long processus, showed around Pilate, of that –like a historical person- is linked or the crucifixion or the resurrection. Searching on background of fifth article, it’s demonstrate that “third day” and “was raised” – understanding the resurrection event – are rooted in 1 Cor 15:4 Palestinian formula credendi, pointing that Greek verb “egeiro” are replaced by “anistemi” in Nicean Creed.