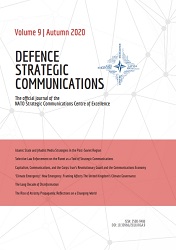 Summary/Abstract: The Islamic Revolutionary Guard Corps (IRGC) have consolidated an economic empire, acting as a corporation similar to AT&T or Vodafone. Yet, despite the prominence of the IRGC in the Iranian economy, few studies have engaged directly with the topic, and fewer still have examined the forces motivating its involvement. This article considers the extent to which the IRGC relied on the Iranian communications economy under former President Ahmadinejad to justify and promote its strategic narrative. Defining ‘communications economy’ as the system of ownership and distribution relating to communications infrastructure, the article investigates the alignment between strategic narratives and military ownership of communications infrastructure. The article argues that the IRGC relied on the communications economy as an ideological channel, a coercive tool of power projection, and a persuasive tool of defence; but also, beyond ideological concerns, the IRGC as an opportunistic institution became reliant on the communications economy as a source of capital gain.