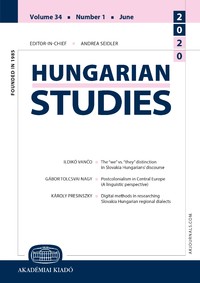 Summary/Abstract: The 1Sg forms of ik-verbs are identical in the definite and indefinite conjugations in Standard Hungarian. The use of nonstandard forms can evoke discrimination despite the fact that it has been well-known for a long time that by the 18th century the ik-paradigm survived only in some eastern and western dialects of the language (Simonyi, 1906a, p. 14; Brassai, 2011, p. 253; Benkő, 1992, p. 213). In the early 19th century the language revival movement revived the disappearing ik-conjugation (Révai, 1806) and made it part of the educated, literary, and later standard variety. The present paper demonstrates how a paradigm that almost completely receded became the tool of language stigmatization as a result of the actions of those with linguistic power, and shows, on the basis of a questionnaire based study, to what extent the ik-paradigm is present in the language use of 14–19-year-olds at the beginning of the 21st century. This paper addresses the issue, on the one hand, of how the use of the ik-conjugation of Hungarian can still be the measure of educated speech in Hungarian despite the fact that, according to historical linguistic evidence, this conjugation was no longer used in most of the Hungarian language area over 200 years ago. On the other hand, I aim to demonstrate, on the basis of a questionnaire based survey, that education is the most important factor in the continuing use of the conjugation (or the remnants of it).