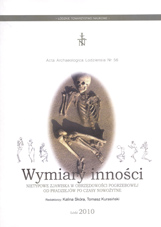 Summary/Abstract: In early mediaeval cemeteries in Poland from turn of the tenth and eleventh centuries, various norms come into being with regard to the funerary ceremony. One assumes that they were associated with the introduction of Christianity. Inhumation is the rule, with the body placed on an east-west axis on its back, with straightened arms. From the turn of the 12th and 13th centuries cemeteries are located exclusively in front of churches and the position of the body changes, and the normal form of inhumation is with the head placed towards the West. In the majority of necropoleis from this period, we can observe the introduction of untypical burials. The commonest found deviation is with regard to the laying out of the body. It occurs in the case of a small quantity of burials, but the variations are very similar. The untypical burials are characterized by the following features: the flexed position of the body, the placing of the body on its side or on its stomach, different variations in the laying out of the arms, lack of grave goods, peripheral location and untypical orientation. Such practices are commonly called ‘anti-vampirical’, and the burials in question of ‘vampires’. Traditionally, the supposition would run, that in this way one would ensure oneselves against the dead, against whom they were taken. In very many cases, it has been observed, that part of the burials might have come from a later date. This is evidence for the utilization of old cemeteries for the burial of the dead excluded from Christian society. Such practices are confirmed by ethnographic sources. Attention has been called to the features of many untypical burials, with flexed legs and hands resting on the shoulders. Confirmation of this is found in iconography, occurring universally in the artistic cannon, showing the so-called gestures despair. Attention has also been called to the problem of the possibility of the occurrence in mediaeval burial rites, of the penitential position. Reference has been made to the burial of eccentric burials rulers and popes. These features have been associated with a particular type of piety, appeasing for one’s own sins, or for those of one’s ancestors. In conclusion, it is stated that the features of early mediaeval ‘vampiric’ burials are the atypical position of the body, could be better understood, for example, as: a) persons who have been rejected by God, b) the Christian penitent in a suitable position as a gesture of last chance One should also not rule out the possibility that part of the so-called ‘anti-vampiric’ practices were not due to fear of the dead, but rather than care for them.