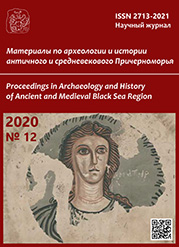 Summary/Abstract: Ceramological research is devoted to a rare type of polychrome glazed ware that was discovered during archaeological excavations between 1961 and 2015 in the former Ottoman fortresses of Azak and Sed-Islam in the North-Eastern Azov region. It was a first-ever possibility to identify and study fragments of this tableware dating back to the 17th — 18th centuries, which are stored in the stock collections of Archaeological Museum-Reserve “Tanais” and Azov History, Archaeology and Paleontology Museum-Reserve. Over 50 years of work at these archaeological sites, 97 fragments of glazed earthenware with marble-like decoration were discovered (18 fragments — in the Sed-Islam fortress, 79 fragments — in the Azak fortress). The predominant fragments are the remains of open-shaped vessels — plates and bowls (90.8%). Fragments of closed-shaped vessels (jugs) are very rare (6.2%). In Azak, 3 lids from jugs (3%) were found. According to the author, most of this tableware is imported from Anatolia and from the Coast of Marmara Sea. Visual similarity of the clay dough of some fragments of “marble” ceramics found in the North-East Azov region, with the molding mass of products from the workshops of the South-East Crimea (which accounts for about 80% of the total number of glazed ceramics from the Ottoman fortresses of Lower Don region) does not rule out the presence among them of products of the Crimean potters, who apparently imitated tableware of Italy and Asia Minor with the fashionable marble décor of that time. A number of future petrographic, X-ray structural and chemical analyses will bring clarity to this issue.