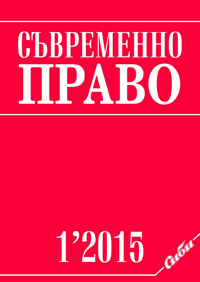 Summary/Abstract: This publication is dedicated to the 135-th birth anniversary of Professor Venelin Ganev. It traces his involvement and role in the Bulgarian League for Defense of Human and Civil Rights of the citizens, from the beginning of its actual occurrence in 1922 until its dissolution in 1947. In the activity of V. Ganev, as chairman of the League outlines several periods: from 1922 to 1938, when the League was disbanded for the first time; 1945–1946, at the time when he was regent; 1946–1947, when the activity of the League is permanently discontinued. Prof. V. Ganev actively participated in all initiatives of the League, which can also be classified into several groups: individual defense of violated human and civil rights; official acts (resolutions) of the League against the violation of human rights in the country; preparation of the constitutional project in 1947. Despite the efforts of the League and personally by prof. V. Ganev for the protection of human and civil rights in Bulgaria, the systematic violation and then ongoing brutal terror can not be effectively countered by the League. The League however left a lasting mark in the time – in the early 70s of the twentieth century its activities has been resumed abroad as part of the total immigrant movement against the totalitarian regimes in Eastern Europe.