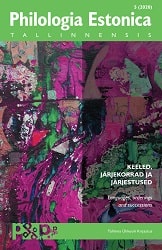 Summary/Abstract: This paper considers the early and later stages of the acquisition of epistemic modality, focusing on certainty and uncertainty, and such basic forms of their expression as parenthetical modal words (e.g. navernoe ‘probably’, možet byt’ ‘maybe’, konečno ‘of course’, dejstvitel’no ‘really’), along with sentential complement constructions (e.g. I dumaju/sčitaju, (čto) p ‘I think/believe (that) p’), which are closely connected in semantics and functions. Epistemic and – more broadly – subjective (modus) markers are interpreted as linguistic tools, conveying the propositional attitudes and feelings of the speaker/writer to a given state of affairs. Sequences in the development of epistemic repertoire, the epistemic density of spoken speech and the written texts of Russian children and adolescents, as well as the functions performed by epistemic markers, both at utterance level and text level, are discussed.