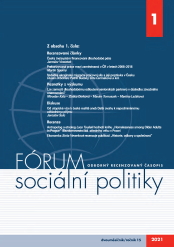 Summary/Abstract: The article addresses precarious work performed by employees in the Czech Republic in the period 2008 to 2018. The approach involved the operationalisation of uncertain positions in the labour market, with an initial assumption that two types of such employees exist according to employment legislation, i.e. those working on fixed-term contracts and those on part-time contracts. This approach is validated in the article via the consideration of several related aspects (income differences, differentiation between professions and the unemployment risk) using data from the Labour Force Survey. The results show that precarious employees have a household income per capita of below the income poverty line. The next step of the research identified those occupations with a higher incidence of precarious work with respect both to the main classifications of the ISCO occupation classification and individual occupations. It was confirmed that the professions affected are those with lower qualification demands - auxiliary and unskilled workers (approximately 9%) and workers in the services and retail sectors (approximately 4%). Furthermore, the article presents time-series aggregated data on both of the types of precarious work identified approximately from the beginning of the financial crisis in 2008 up to 2018 in connection with the development of unemployment. The application of the operationalisation approach, especially concerning short-term contracts (the first type), was further validated by the results of the unemployment risk analysis of the panel component of the data. It was determined that a higher probability of unemployment occurs, even within the same occupational groups (and considered according to gender and education), with respect to those employees who occupied precarious employment positions in the previous quarter. When compared to other research approaches, the operationalisation of unstable work via the analysis of secondary data proved to be a suitable tool for research into both the conditions of those with precarious positions in the labour market and the various effects on the behaviour and thinking of those affected.