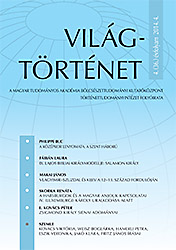 Summary/Abstract: The relationship of the Vladimir-Suzdal Principality and Kiev at the turn of the century is depicted from the viewpoint of princes in the chronicles. Other participants of the power struggles were the druzhina and the veche. Only scattered pieces of evidence contain references to the role of the druzhina under Vsevolod, prince of Vladimir-Suzdal (1176–1212), and even less can be revealed about the policy of the north-eastern veche. Under these circumstances, we can evaluate only the activity of the prince. During almost 18 years from July 1194 until April 1212, the princes of Kiev were exchanged eleven times. The former old-Russian capital was the subject of competition between the Rostislavichi of Smolensk and the Izyaslavichi of Volhynia in 1194–1205, whereas between 1206 and 1212 the Rostislavichi were contesting the Olgovichi of Chernigov for power in Kiev. Five, i.e. almost half of the eleven changes on the throne can be connected to the activities of Vsevolod. Therefore the prince of Vladimir-Suzdal not only paid close attention to events in the southern part of the Rus, but also had an eff ect on them. However, he did not interfere directly, not even if he had to suff er a serious loss of prestige, which was a signifi cant modifi cation of the Kiev-policy of his brother Andrei Bogolyubsky, and it obviously did not go unnoticed among historians.