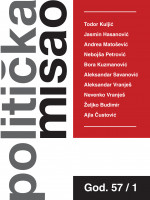 “Čovjek je ujedno i ono što može biti”: interpretacija značenja termina otuđenje u socijalizmu i postsocijalizmu
“Man is also what he can be”: Interpreting the Meaning of the Concept of Alienation in Socialism and Post-Socialism

Summary/Abstract: The paper analyses the notion of alienation in a dual sense: first, as a significant articulation of philosophical and sociological problems in Yugoslav socialist thought and beyond, but also as a very present accentuation of the work conditions detected in industry. This double position builds a partial comparison with and analysis of the context of today’s working conditions in the “cognitariat” sector, but from which detection of alienation is almost completely removed and replaced with terms such as “hopelessness”, “indifference”, “futility”, “self-exploitation”, or “burnout”. The paper interprets the lack of such substitution, since alienation, despite the constantly emphasized abstractness of its meaning, connotes criticism, change and overcoming the current issues. This implies strong effort towards disalienation, which is not the case with the mentioned substitutive terms. For this reason, linguistic analysis and attempts to answer the question on the possibility of speaking and analysing a part of today’s, especially working, conditions in terms of alienation are a dominant part of this paper.