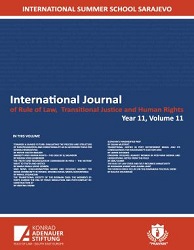 Summary/Abstract: When the civil war in El Salvador terminated in 1992 after more than a decade of violent conflict an amnesty law was passed in 1993 that prevented all legal investigation and persecution into acts committed during the war on both sides. On 13 July 2016 the Supreme Court of El Salvador found this law to be in violation of human rights and therefore, declared it void, which for the first time after more than 20 years opened the possibility of accountability for the commitment of war crimes during the civil war. The assessment of the compatibility of amnesty laws with human rights is not un unknown area. The Inter-American Court of Human Rights (IACHR) had been confronted with this topic on several occasions in the last decades. Since it had become a common practise in Latin American states to pass amnesty laws before allowing regime change to happen the IACHR developed an elaborate jurisprudence on its compatibility with the American Convention on Human Rights (ACHR). This article will elaborate on the development of the jurisprudence of the IACHR regarding amnesty laws and the significance of the decision in the case of El Salvador in 2012. Further, it will assess the Salvadoran Supreme Court`s decision and the implications of the verdict for the state. It will follow up on the implementation process and will conclude with the obstacles this process has faced in the due course.