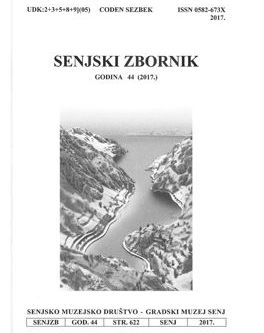 Summary/Abstract: Between the littoral slopes of Velebit, south of Senj, stretches Podgorje, which in global dimensions could freely be described as the foothill of the Croatian Tibet. Moreover, our prematurely departed ethnologist and anthropologist, Tomo Vinšćak, who visited both heaven touchingpoints, claimed that Kailash and Velebit were mountain relatives – the Himalayan and Croatian Olympus (1991). In this paper the need of a coherent familiarisation of the specificity of this region and its people will be brought up and also argued for with the same persistence from ground level insights (with experience). So if it is seemingly possible to define the foothill of the Croatian Olympus (with a lack of empirical comparison) as a pretentious idealisation, it remains the factography of many disciplines, which synergistically rearranged allow a less depressing interpretation of the region by its people.In this paper such a scientific association is sought to be reached with the intertwining of the use of anthropological perspectives (emic-etic) and a Jungian analysis of an empirical archetypal sequence that links the author with this region.This is a region of the frequent collective forgetfulness of all the historiographic facts, which confirm that despite the harshness of nature which has poured the 'bura' and drought down here over the centuries, and the description that from this region people just escaped and disappeared because of the difficulty of life, it has remained a junction of numerous peoples and populations.The anchor point of many cultural, sacral and imaginative dimensions for Croats, just like one of the final destinations of the largest Croatian migratory flows. In today’s literal and trite postmodernistic interpretations – a region of multicultural encounters despite the in loco of the difficult narratives of life. Following the same superficiality, it also becomes a region for a brief drop by in the manner of an altogether ritual form of an expedition at the challenge of the wilderness – from the touristic branding of wandering through Velebit, under the motto of the preservation of untameable nature, to the altogether planned experience of being beaten by the 'bura' on the quayside of Senj. In order that everything mentioned is not left to just an eco(nomic)historical search of symbolism,metaphors and bricolages of myths, it would be good here to widen the interpretation of the specificity of the locality and to add the reality of bio-cultural history. Thus, the contributions of the research of many kinds of disciplines in the area of medicine have for decades already pointed to a kind of, let’s say, paradox of the Podgorje specificity,which is reflected in the contrast of a place of hard living compared to a desired place to live out old age or if wanted cosmologically and less anthropocentrically, an old age of open-ended enjoyment and comfort. The final aim of the analysis of this paper is the (re)direction of the possible interests for Podgorje with the touristic-exotic-profitable colonial matrices onto a cosmological-ethical understanding in which the interconnection of man, nature and history deserves a much wider perception of its 'endurance'instead of 'sustainability' or 'revitalisation'. With the cosmological approach said, each equation of neoliberal comfort here is inapplicable, quite the opposite, it is reversely proportionate to the historical and biocultural evidence. To conclude – nothing surprising in relation to the possibility of the interpretation of this region as the foothill of the Croatian Olympus.