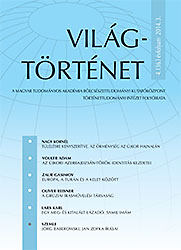 A grúziai Írásművelési Társaság. A nemzeti elit iskolája és nemzetszervezési tevékenysége
Society for the Promotion of Literacy among the Georgians: A School for the Modern Georgian Nation and its Elite

Summary/Abstract: On the 15th of May 1879, the Society for the Promotion of Literacy among the Georgians was officially founded in Tbilisi. It represented the late product of a small but very active group of intellectuals, the tergdaleulebi, who played a pivotal role in the building of the modern Georgian nation. The Society for the Promotion of Literacy among the Georgians thus served as a tool to introduce national self-reliance and to counter the voluntary and forced Russification of the Georgian nobility. This article initially analyses the development of the “Society” between 1879 and 1914, focusing on the number, geographic origin, estate and social background of its members, as well as their educational backgrounds, professions and political activities. The article then attempts to characterize the various activities of the “Society”. Although the activists found themselves marginalized between the nobility and the peasantry, they managed to develop a sense of Georgian ethnic affiliation as a cultural community freed from estate or locality, accessible to all of its potential members. With its cultural activities, the members developed an institution of public socialization to replace the traditional ones. The social cleavage between the nobility and the peasantry and the domination of the Tsarist state, however, hindered the rise of a political loyalty on national grounds. The non-existent political nation was substituted by a new, culturally and ethnically sensitive community with the “Society” as its main organizational backbone. In this kind of “moral community” the growing layer of marginalized, educated white collar-workers could meet each other and coordinate their efforts.