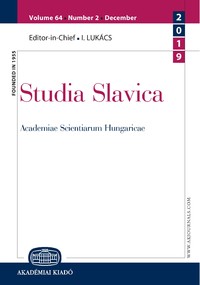 Summary/Abstract: The current linguistic situation of the Kievan conglomeration which has evolved over the course of several centuries presents itself as a unique subject for linguistic description and study, differing substantially from analogous examples elsewhere in the Slavic world. This paper discusses the sociolinguistic multicodality of the present-day Kievan urban dialect with concrete illustrated examples from actual non-staged speech found in Ukraine’s capi- tal. We have also included an analysis of the possibilities for such switching (as well as a description of the communicative situations that are linked with this phenomenon). The language is complicated by many other factors, including geographical, ethnic, cultural, socio-political, and historical, as well as the degree of national identity of native speakers and regional heterogeneity. It is often said that there are not two (Left- and Right-Bank Ukraine), even not twenty-two, but rather two hundred twenty-two Ukraines. It is hardly possible to give a completely accurate assessment of the real language situ- ation in contemporary Kiev, for any statistical data, official proclamations, or linguistic ap- proaches to the interpretation of modern “language reality” mostly have no more than an evaluative character, which is caused by a number of extralinguistic factors and modern political and ideological challenges that have nothing to do with the real language situation. The complexity of the description of the modern Ukrainian language situation is that it is impossible to talk with certainty about any universals and make unambiguous conclu- sions regarding the entire Ukrainian ethnic area as a whole. The territory of modern Ukraine (and Kiev) is a many-sided palette with linguistic, cultural, religious, historical, and ethno- graphic points of view. Historically, the modern Ukrainian territories belonged to different countries, empires, political and religious spheres of influence, which is one of the primary reasons why Ukrainians are heterogeneous in their mentality, degree of national self-iden- tity and, as a result, in any given choice of a particular language code for everyday com- munication, due to both regional identity and the various historical pasts of the east and west of Ukraine, geographical location, i.e. the proximity to Russian and European culture.