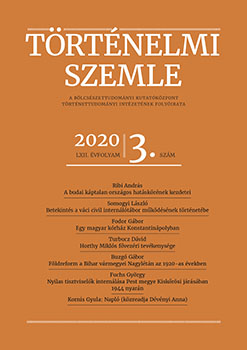 Summary/Abstract: In the summer of 1944, Dr. János Benedek, főszolgabíró of Kiskőrös district, had two officials of the local far right interned, in a country under Nazi occupation and governed by an administration that closely collaborated with the occupying forces. The dominant view of Hungarian public administration is that it slavishly served the German invaders and the collaboration Sztójay administration on every level, before all with regard to the deportation of the Jewish population. The evidence offerred by the memoirs of dr. János Benedek, on the other hand, and the investigational material that has been subsequently revealed, show that in the greatest county of Hungary there were people in the public administration, from the public notary to the főispán, and even in the Ministry of Home Affairs, who, assisting each other, proved able to doublecross the regime and put up covert resistance. As very few memoirs from people acting as főszolgabíró have come down to us, especially from the twentieth century, it is extremely precious to glimpse the complicated web of the lower layer of the administration of the Holocaust era from the perspective of an official whom the local far-right extremists wanted to have removed on account of his sabotage of the anti-Jewish legistation. The investigations give us a sense of the elbow room that was available to contemporary county officials against the ever increasing pressure of far-right extremist movements and parties in order to preserve their control over the administration.