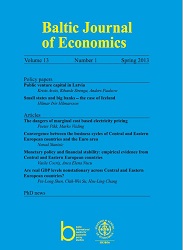 Summary/Abstract: The Icelandic economy was hit hard by the global economic and financial crisis that started in the fall of 2008. During this crisis the three largest banks all collapsed and many other smaller banks and companies went bankrupt in the aftermath of the crisis with severe consequences for the economy and the people. Prior to the crisis, Iceland, a high income economy, had experienced strong growth rates and unprecedented expansion in overseas investment and activities, especially in the financial sector. This article focuses on action by top government officials during this expansion as well as during and after the collapse of the Icelandic banks. The findings of the study are that the government showed negligence and made mistakes by not taking credible action to manage risks following a rapid cross border expansion of the Icelandic banking system. This had severe consequences and resulted in the collapse of the Icelandic economy in October 2008. The discussion can have a wider relevance than that for Iceland only. This is especially true for small countries with a large banking sector, using their own currency, and with limited fiscal space to support their banks during a crisis.