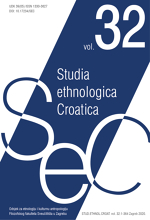 Summary/Abstract: Sport as a social phenomenon is closely related to society per se. Football is a traditionally considered as men's sport in which women, not only in Croatia, are discriminated on several levels. Gender inequality in Croatian society is also reflected in the position of women in football, and the dominant patterns of patriarchal culture have a great influence on spreading of gender stereotypes and the sexualization of female football players. One of the aims of this research was to gain insight from a women’s perspective into a wide range of socially very sensitive topics, addressing different forms of inequality, discrimination and sexism to which women are exposed in football. We were also interested in how the highest-level female football / futsal players see their own position in Croatian society, the problems they face and how their experiences are related to various socialization agents, family, peers, colleagues, friends, education system, media and political and economic structures in Croatian sport and society. We have conducted nine semi-structured interviews with female players and three with informants. The results of the research indicate some progress and a gradual exit of Croatian women's football from the world of anonymity, as well as some progress from traditional to modern understandings of women's football and futsal in Croatian society.