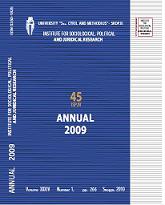 Summary/Abstract: When analyzing the political parties in Macedonia, the attention is quite often drawn onto the larger parties, which present a bipolar image of the system. When it comes to the small political parties in the Republic of Macedonia, they represent an unexplored area, to be more specific, when it comes to the reasons for their forming and their involvment in the changes in the Law on Political Parties, their connection with the Electoral Code (i.e. the Law on Electing Members of Parliament) their survival on the political scene, copmared to independent or coalitional participation in the elections and compared to the election models as well. More specifically, the subject of this research is connected to the electoral system, i. e. to the legal regulative and how it affects the small political parties and their position and role in society as well as their chances for participation in Parliament.