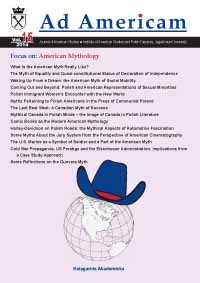 Summary/Abstract: In Poland, although in‑depth knowledge of Canada is rather meager, the country of the maple leaf invariably carries positive connotations. In the popular imagination, Canada is typically perceived as a land of plenty, offering practically unlimited possibilities of development for its citizens. It is also seen through the prism of its natural environment and Aboriginal Peoples, and this is why the country is enveloped in an aura of mystery and adventure. Such a perception of Canada stems not so much from broad media coverage and ever‑present cultural as well as political influence, as is the case of the USA, but largely from a few popular literary works published throughout the 20th century. Among them there are translations of a few Canadian books which are popular in Poland, as well as a few books on the subject of Canada written by Polish authors.