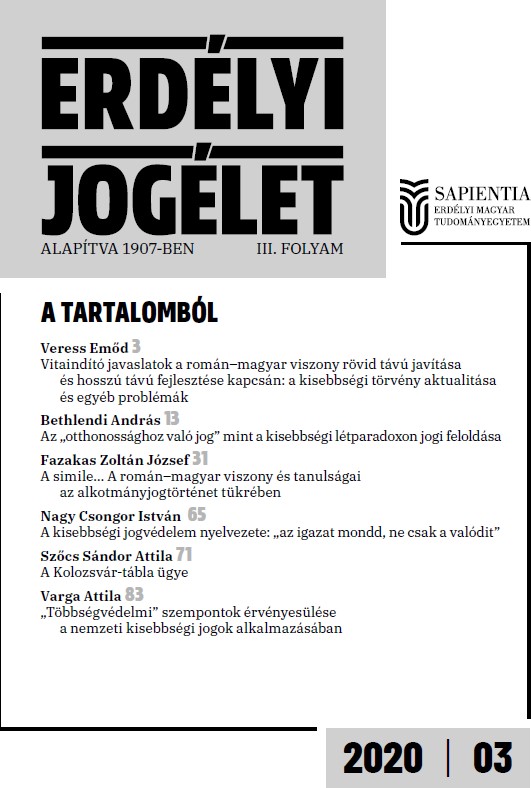 Summary/Abstract: The study undertakes to clarify some basic issues that have been erroneously recorded in the public consciousness, to make a kind of confrontation in order to take the initial steps of improving the Romanian−Hungarian relationship. In order to achieve the above goal and basic thesis, it is a primary task to illuminate and banish the mistakes and myths recorded in the public consciousness from both sides. In this context, it is revealed that neither the topos of the “millennial Hungarian oppression” simplified to the extreme nor the thesis of the “slow − anti-Hungarian − Romanian national occupation” can be held. In the interest of constructive dialogue, it is worth returning to the position that prevailed in the Hungarian reform era, and even at the time of the unification of the Romanian states, according to which the interdependence and commonality of destiny of the two peoples is a real and common path. To this end, the study uses legal history to present the original meaning of nationalism, the majority and minority arguments made during the drafting of the Hungarian Nationality Act of 1868, the models that can be interpreted in the majority−minority relationship, and the relationship of the two states to these models then and in the present day. In this context, the constitutional conceptions of Hungary and Romania are analysed in connection with the minority issue with the intention to prove the legitimacy of the needs of the Hungarian minority. The basic premise of the study in this area is that if a minority demand was legitimate from the Hungarian side within the Hungarian state, then the argumentum a simile from the Hungarian side is necessarily legitimate within the Romanian state.