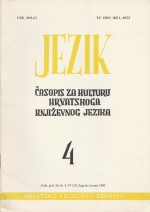 Summary/Abstract: In this paper a documentation is presented on the basis of which is shown that from the beginnings of the Croatian branch of the СупПо-Methodian tradition its language is accordingly called "slovenski". Later in the Middle Ages this name became interchangeable with "hrvatski". This was transferred to the literature whose language was based on the vernacular. With certain variations in space and time this interchangeability remained in vigour until the end of the 18th century. It determines one particular literary body in the Slavic complex: the Croatian Literature and its language.