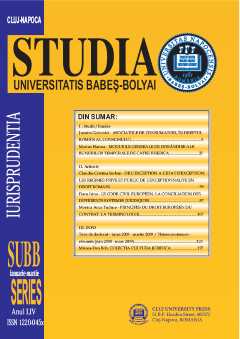 Summary/Abstract: Reflections on the Fiscal Sovereignty of the Member States of the European Union. In this article, the author focuses on a fierce and always new debate on the matter of fiscal sovereignty of the Member States of the European Union, as compared to the fiscal sovereignty of the Community. The main arguments of the debate are pointed out with a view to, amongst others, the Romanian entry into the European Union as of January 1st, 2007. The author first deals with some general comments on the division of competences between the Community and the Member States, in particular as far as tax competence is concerned. In that respect, the author focuses on the texts of the EC Treaty that might be used as a legal basis for the Community action in the tax field. Furthermore, the author is concerned with an analysis of the limits of the Member States' competence for tax matters. Following a distinction between "positive integration" and "negative integration", the author focuses on two main issues: limitations enforced by Community action in that field and limitations enforced by the European Court of Justice. As far as the Community action is concerned, the author clearly points out that a satisfactory degree of harmonization has been reached only in the field of indirect taxation. Direct taxation is still thought to be a reserved domain for the Member States (which sustain the unanimity rule of decision and defend their fiscal sovereignty by all means) and therefore, in this field, the Community can not really act or is forced to some soft-law approaches. Although the European Court of Justice is striking down an impressive number of national fiscal regulations as contrary to Community law, the author points out that the Court can not say what is to be done in the tax field. The author concludes that Member States, including those which have recently joined the European Union and especially Romania, have to pay attention to their long-term objectives. As the internal market needs close cooperation, the mechanism of enhanced cooperation is viewed as a possible alternative.