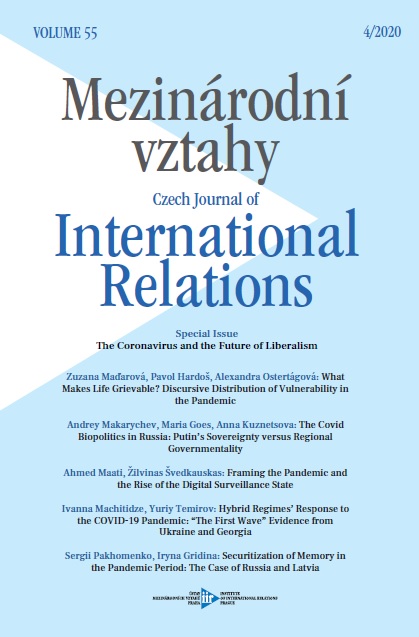 Summary/Abstract: The outbreak of COVID-19 has significantly reshaped debates on the global order, democratic politics and the liberal mode of governing societies. Some have compared the virus to the “ultimate empty signifier”, which allowed difficult ideological groups to fill it with their own securitizations, creating in an instant a plethora of political otherings. For IR realists, the sudden collapse of cross-border movement and other privileges of the globalized liberal elite came as a vindication of their long-cherished argument: the nation state remains the key actor in international politics, and the post-national world had largely been a utopian liberal illusion. Right-wing nationalist populists have been saying the same thing but in a different language and were apt to make COVID-19 instrumental to their purposes. Thus, Viktor Orbán quickly linked it to the agenda of migration and used the state of exception as a pretext to further limit the democratic process in Hungary. However, as students of populism have also stressed, the populist response to the pandemic has been far from uniform. In a yet broader perspective, while some democratic governments enacted draconian measures in response to the pandemic, suspending basic individual freedoms, some dictatorships like Belarus experienced a sudden “flow of liberalism“, refusing to cut down on both economic activity and cross-border movement. This special issue focuses on comparing the liberal and illiberal reactions (both domestic and international) to the pandemic, looking into how it has affected the democratic and non-democratic forms of governance; examining where the responses have been similar or overlapping, i.e. where COVID-19 has practically blurred or erased the border between liberal and illiberal politics; looking into how different types of regimes and political groupings have borrowed new elements and styles of politics, e.g. in which circumstances populist or autocratic politicians suddenly seemed more liberal than their liberal and democratic counterparts; and investigating the ramifications of these changes for the liberal components of the globalized international order.