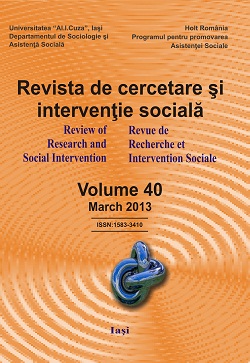 Summary/Abstract: Although there is temptation to judge the Roma community as having a strong cultural constancy and stability in time, as surviving at the periphery of societies, outside the process of modernization, this paper aims to make an analysis of the factors which caused important changes in the socio-economic and cultural state of this community within the context of globalization. The prejudice that the Roma are a community closed within its traditional culture had and still has adverse effects on the perception which the majority population has about the Roma community and on the support policies for the marginalised segments of the Roma population too. In some ways, the Roma population doesn’t have a different pattern from all the other populations, minority or majority. All the populations are engaged in a process of social change and reconstruction, of transition from traditional to modern cultural patterns imposed by a dynamic society undergoing fast modernization. It is true though, that modernization is not only an opportunity through the unavoidable commitment of the communities within the global flow of change, but also a process of new social differentiation. The division of work has generated new pressures of internal differentiation for all populations: some people advanced socially, others remained at the margin of the process. The popular history of the Roma, with the myths of any such history, includes also the intellectuals, prestigious politicians and successful people as main patterns of exiting the ‘Gypsyhood’. But in spite of this, the paper underline that the concrete social and economic conditions put, in many cases, the Roma population, as ethnic group in a special social and cultural position different from that of other minorities. These papers bring a theoretical starting point for an empirical survey focusing on the successful Roma population. The survey was an exploratory research done by IQLR at the end of 2012, being centred on the Roma elite: intellectuals, political leaders and businessmen. The research has been identified three successful categories among the Roma people, mentioned above, as well as the factors associated to their success. The survey data are yet to be processed completely. However, they will certainly bring another perception/image on the Roma people, different from the one associated to severe poverty, as shown by the sociological research up to now.