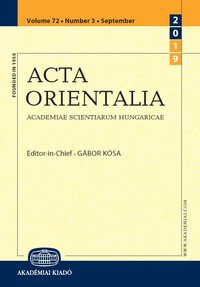 Summary/Abstract: The previously non-discussed ancient east Asian Wanderwort araĵaran ‘interjection; barely, suddenly’ is discussed and presented in great detail, and traced throughout many languages phonologically and semantically. The root has also undergone local secondary semantic developments in places, meanings which have then been borrowed into neighboring languages, some already carrying the same root, some borrowing only the new semantic meaning. Aft er detailed lexical documentation of this root in various languages, a possible semantic map is presented at the end of the study. Language groups and languages involved in this very geographically spread out Wanderwort are the Turkic, Tungusic, Mongolic and Yukaghir languages, as well as Tocharian B, Sel’kup, Kamass, Kott, Russian, Japanese and Iñupiatun.