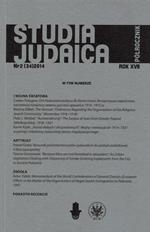 Summary/Abstract: In the Second Polish Republic Jews played a significant role in industry, trade and crafts. As a result, tax matters were one of the most important fields of activity of the representatives of the Jewish minority in the Polish Parliament. Jewish parliamentarians tried to defend the economic interests of the Jewish minority in the years 1919–1939, and their speeches frequently defended all entrepreneurs in Poland as well. Generally speaking, the attitude of Jewish parliamentarians towards Polish tax policy was critical. From the mid-1920s they demanded tax reform. Moreover, they considered the industrial tax as the most harmful, as it hampered economic activities. Despite consistently reported demands, the effectiveness of Jewish politicians in this field was too small, and the decisions taken within the fiscal policy always depended on the will of the Polish majority in the parliament.