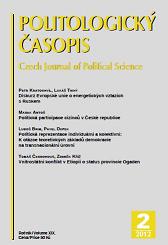 Summary/Abstract: Traditionally, political rights are an important component of the relationship between the state and its citizens, and therefore only citizens are entitled to bear them. Nevertheless, due to international migration this approach is subject to change and nowadays many countries give voting rights also to foreigners who are resident there. The attitude of the Czech Republic has so far been conservative, which means that only the minimum standard enacted by European law is accommodated. However, preparatory work on a new electoral code has given rise to a discussion on the possible extension of voting rights also to foreigners from third countries resident in the country. This article tries to enhance the discussion in three ways. The first part consists of an analysis of what the potential percentage of foreign voters is, taking into consideration their geographic distribution in particular municipalities and thus providing an estimate of their influence on local councils. According to the results, potential foreign voters form a relevant minority only in 11 out of 6251 municipalities. The second part is focused on the actual exercise of voting rights by European citizens resident in the Czech Republic, who have it already. A representative survey conducted on a sample of 5 % of municipalities shows that the turnout of these voters is negligible (approx. 2.4 %), far below the EU average. The last part of the article deals with the legislation in this area which causes crucial obstacles to the real exercise of political rights by foreigners, and therefore is incompatible with the European law.