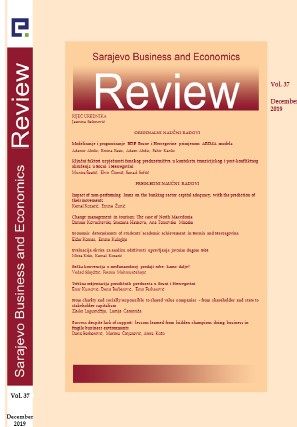 Summary/Abstract: This research has been done at September 2018, when great attention was focused on the upcoming general elections in Bosnia and Hercegovina. We are witnessing that a lot of dissatisfaction with politics is taking place in Bosnia and Herzegovina, so the motivation for this research was generally a low trend of youth turnout in the elections. The primary goal of this research is to examine the impact of socioeconomic and demographic variables on the intention of students of the School of Economics and Business at the University of Sarajevo to vote on the upcoming elections. The intention to vote on the elections will best be examined through the degree of education of the environment in which the student is located, the most likely his parents, the income of his household and his active participation in the elections. We have analyzed the primary data collected from students at the School of Economics and Business at the University of Sarajevo. The data were collected through online survey, it is a deliberate sample of 204 people, of whom 145 are female and 59 male, aged from 18 to 25. The dependent variable in the logistic regression model is „student will vote on the elections(yes/no)“, while the independent variables are the monitoring of campaigns of political subjects in the media, the language in which the student is studying, voting on 2016 elections, the mother's education, the education of the father, a way of studying, monthly household income, way of life during studies, employment and gender. Logistic regression model was used for data analysis. The variable language in which the student is studying, the monitoring of campaigns of political subjects in the media, employment, living in their own flat during studies, gender and monthly household income in a range from 1000 to 1499 and from 1500 to 2000 turn out to be statically insignificant variables in the estimated model while the rest of the variables are statistically significant. For variables whitch are statistically insignificant in the logit model, we will use the hi-square test in order to examine interdependence with the dependent variable. The secondary goal is to establish a degree of interest in politics and education, and a degree of belief in political subjects among students. A detailed analysis has established a low level of interest of young people for politics, and a very high degree of distrust in political subjects.