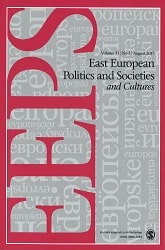 Summary/Abstract: The Dayton settlement of November 1995 marked the end of not one but two struggles over the former Yugoslavia. The first was a struggle of armies: between the armies of the republics of Croatia and Bosnia-Hercegovina on the one hand, fighting for national survival and state independence, and the military forces controlled or organized by Serbia on the other, fighting to crush these republics and dismember them territorially. Although Serbia began the war in 1991 with an apparently overwhelming military superiority over its victims, on account of its control of the Yugoslav People's Army (JNA) and its much greater strategic and psychological preparedness, by late 1991 the Croatians, followed by the Bosnians by mid-1994, had built up armies capable of driving its forces back. By the time of the final cease-fire in October 1995, Serbian forces west of the Brcko corridor were in a state of near-complete collapse. [...]