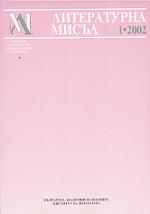 Summary/Abstract: Between 1871 and 1887 Georg Brandes delivered his lectures on "The Main Movements in 19th Century European Literature", where he not only launched the notion "the break of modernity" as the primary task of Scandinavian men of letters, but also stirred the cultures of Denmark, Norway and Sweden, pushing them towards a greater polemicity, topical problems, an increasingly categorical departure from the Romantic legacy and a greater proximity to the spiritual and aesthetic movements in Europe, for the overcoming of the provincial reticence and isolation. The Scandinavian literatures were permeated by new European tendencies, while the notion of loneliness broadened its meaning and became a key concept for the spirit of the time. The study analyses the basic types of loneliness principally distinguished by the researchers and their specific projection in the Scandinavian North, the changes induced by the various epochs. A special emphasis is laid on the attitude to loneliness - conceived not merely as an emotional state as an idea, an outlook to people and the world, - in the greatest representatives of the "break of modernity" in the region such as Ibsen, Bjornson, Schilan, Lie, Garborg in Norway, Strindberg, Jejerstam, Benediktson-Algren, Hanson - in Sweden, Jakobsen, Bang, Jelerup, Pontopidan in Denmark, almost without exception felt the strong influence of philosopher Kirkegaard, the "spiritual father" of that dynamic literary movement. The pattern from Romanticism through Naturalism to New Romanticism, applied to the personal and artistic development of its exponent, eloquently outlines its basic trends until the early 90s of the 19th century, when Knut Hamsun entered literature to take up in his turn the subject of loneliness, transforming it into a dimension of the increasingly important problem of the interrelation between Man and Nature, of the need for a balance between the biological and the spiritual. With his novels a new type of loner entered 20th century