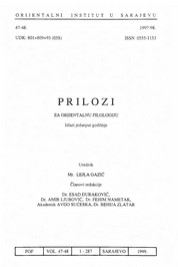 Summary/Abstract: In the article entitled "Onu suz ettirmek ićin bir zanaat vereim" - Some Observations on the Lexis of the Texts in the Turkish Language Written in Latin Script, the author observes the lexis of the so-called Bosnian Turkish language, i.e. of the idiom used in the Ottoman period (i) in the territory of the present-day Bosnia and Herzegovina. The lexis of the idiom has been analyzed on the basis of the texts written in Latin script (dictionaries and grammar books) in Turkish from the 19th century, whose authors were the Franciscan priests of Bosnia and Herzegovina. In these texts the following lexical features have been noted: 1) frequent shift of semantic field of general- Ottoman words [e.g. the word (h)ayvan is used to mean "horse"]; 2) "terming" the Turkish appellatives [e.g. the word nur meaning "God's order"]; 3) overuse of foreign words [religious terms from Armenian and Greek]; 4) the use of words of Slavic origin, dialect words, regional words, ete., i.e. of the words whose etymology is difficult to determine. One of them is the "Bosnian" verb suz ~ süz ol- "keep silent", suz ettir- "shut somebody up", which is not recorded in dictionaries of the Ottoman/Turkish language, i.e. in glossaries of modern west-Rumelian dialects available to me.